How do you write about Dementia and Carers?

See links to the podcast at the end of the post

A podcast play about carers and dementia, Silva Lining's Care Plan, from the perspective of a clinical researcher and neuropsychologist

It's just a better way of treating a human being.
Dons Coleston-Shields

What happens when a neuropsychologist from Nottingham’s The Institute of Mental Health reads a draft podcast play about carers and dementia by a Bristol writer and they chat on the phone during lockdown? In writing about carers and dementia in my podcast play Silver Lining’s Care Plan, Silva The Story, I need to know whether I am getting the portrayal of dementia accurate enough so that people who care for others with dementia or who have dementia, are carried along by the story and not put off by inaccuracies.

Getting older without dementia is enough in itself, as I wrote about here: “Think Young and Keep Smiling” There is a certain amount of science which needs to come through the play, accurately in spite of the fact that the whole story is clearly a fictional invention. When my children and I were watching the sci-fi drama The Expanse, I was interested in their excitement over the realistic science in the drama. It wasn’t something that kept me watching, but it certainly was of interest to them. How could I do my best to keep our listeners engaged?

I had contacted consultant Dons Coleston-Shields first in 2018. Dons is in clinical research, and a neuropsychologist too.  She is Principal Research Fellow & Programme Manager for AQUEDUCT, Faculty of Medicine & Health Sciences at University of Nottingham. She was recommended to me by Professor Justine Schneider, my partner on the project from the beginning. Dons and I established a few personal circumstances in common (Cambridge degree – have I mentioned that before? ;), two musical boys of similar ages, both of us got married to sons of traditional farmers and so on). We had an easy flow of conversation about all sorts, including how I could best portray my character Silva, who has dementia. But only three years later in the summer of 2020, after receiving further funding for the project from Arts Council England, that I manage to speak to her again. I send her my newly drafted podcast play, freshly worked on with my dramaturg Sara Davies. Dons feeds back her responses a week later.

Tips on dementia from a multitasker

Dons tells me about life during Covid-19 and how it’s affected her work as an academic. Like many clinically trained specialists, she is likely to be called back to clinical work at some point.

We continue chatting off topic, about multitasking. Or as Dons calls it ‘Finally tuned executive functioning’. Dons says she thinks she can do this, as she can do everything together at the same time. I say that I think my multitasking ability has got worse over time, and I think that’s partly because of my dyslexia but also how I go about tasks such a cooking – it’s always an invention, a process of using what’s there in the fridge, so takes a lot of concentration.

‘Well if your podcast script is anything to go on’, she says, ‘You’re very capable and talented. Wow, I really enjoyed it’.

This, of course, relaxes me. I’ve had feedback of all kinds over the years and always prepare for criticism.

Dons says that she read all the way through in one go as she waited for her son to finish some sport activity. Had he come back to the car before she finished the script, she would’ve sent him off again so that she could get to the end. She found it powerful and she felt connected to the characters. She thought the dementia element was ‘fine’.

She wonders whether there is some rigidity in portraying dementia for listeners relying on audio because it’s impossible to use the physical aspects of the condition on audio. I agree – after all my script would’ve been quite different if it still had been for theatre. I’d planned on a metaphor of bookshelves in the next theatre draft, which I had to let go of because I was doing this audio version.

‘What is interesting is that with dementia we can change and remain the same.’

Dons says that my get out clause is that I have used a mixed pathology for Silva’s profile – Alzheimer’s and vascular dementia. It occurs to me now that it is possible that I chose this because of my initial chat with Dons three years ago.

She says that what she sees on a neuro profile of someone who has Alzheimer’s, is that they are poorer at memory tasks, language and they are better at visual spatial and attentional tasks. Someone with Alzheimer’s might be very capable of keeping it hidden for a while largely because they can avoid the words that they are finding difficult to remember. Whereas with vascular dementia there is more attentional difficulties. Alzheimer’s is slow, vascular is come-and-go and can suddenly become worse, so it’s more progressive. So in Silva’s case, yes we’d expect to see semantic errors for example for cats she might say cats rather than dogs; we might see auditory errors so she might say sills rather than cells and another kind of error where she might say cuts rather than cats.

She says Silva remains important to a listener throughout the drama, and also there is an extension of her in the character of brain, yet brain also has his own character.

“What is interesting is that with dementia we can change and remain the same.”

It would be better if we could focus on what someone can do.

At this point Dons began to talk about the focus in medicine being on what somebody cannot do. And actually how it would be better if we could focus on what someone can do. What can the brain do and what a character like Silva can do? She says the training for neuro psychologists begins with clinical psychology, which is the right thing. After all, ‘I could train my cat to do a neuro psychology test.’

‘Patients will only come back if you’re telling their story.’

Dons then moved on to say that patients will only come back if you’re telling their story. ‘I was so hooked because Silva’s story was told all the way through.’

Dons says that the way she likes to work as a clinician is that the patients are experts and that her role is about ‘providing scaffolding or the framework for what they’re telling me’. That is true in dementia and schizophrenia and other mental illnesses and also in head injury when the story of someone can change overnight.

‘So if a person with dementia was listening or if the listener is someone who works with someone who has dementia, it won’t jar. I didn’t feel that any moment jars.’

‘I couldn’t put the script down because I wanted to know what happened at the end.’

I mention the care-plans in the play. There is the care plan the system provides her, and the care plan that emerges out of the carer relationship with Karen, which involves the heron, trips to the river and so forth.

‘I couldn’t put the script down because I wanted to know what happened at the end. Silva stays intact as a personality. As clinicians we’re part of the serialisation of the story. But the endings change in ways we might not expect.’

I tell Dons that I find what she says very humble.

‘It’s just a better way of treating a human being I think,’ she says. ‘I’m not sure that the clinical relationship with patients and its limitations are about time. Although that is often cited as the reason for the limitation of the consultation. It’s more about the hierarchy and how keen some clinicians are on being the expert for all sorts of reasons. The NHS likes us to stand on our status.’

Want to find more about this podcast drama about paid carers and dementia?

We’d love you to stay Connected with us and listen to Silva Lining’s Care Plan Podcast. Listen to the podcast on Spotify or Apple links below, and Sign up here: keep in touch with Silva 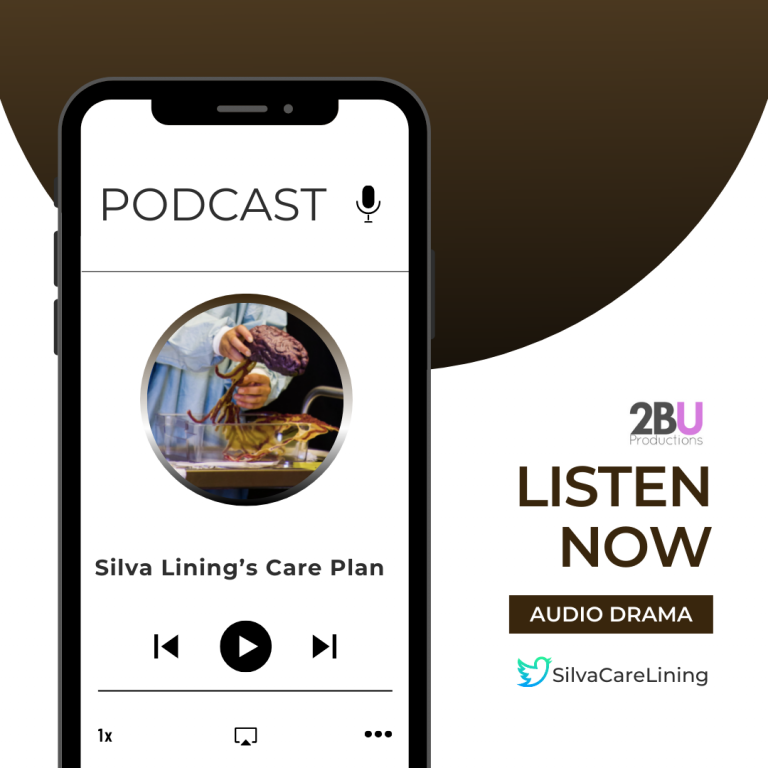